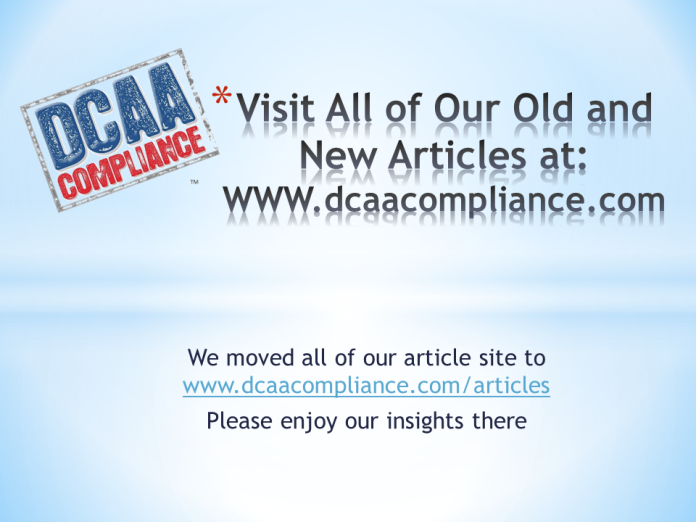 “2(i) The Contractor shall submit an adequate final indirect cost rate proposal to the Contracting Officer (or cognizant Federal agency official) and auditor within the 6-month period following the expiration of each of its fiscal years.”

A great deal of the criticism, and two ACTS OF CONGRESS, focused on DCAA’s simple inability to complete audits and address contractor costs through timely audit of contractor’s incurred cost proposals (ICPs). An ICP is a contractor annual report accounting for the money spent and allocated to a government contract.

DCAA’s primary defenses are the increase in work due to almost two decades of war, a recent focus on more complex audits, and inadequate staffing.

Over the years I employed one simple breakdown to illustrate DCAA’s work efforts. According to DCAA’s own Report to Congress, DCAA employed 4,167 auditors. According to the same report, DCAA completed 3,581 audits in 2017. This works out to less than one audit per year per auditor (.86 audits per auditor). In the 2011 report (the oldest on DCAA’s website), the number of auditors was higher at 4,225 and the number of completed audits stood at 7,390 for a ratio of 1,75 audits per year per auditor.

Yes, the vast majority of work the AUDIT Agency does each year is not audit.

DCAA often justifies this lack of audit by comparing itself to the IRS and the IRS’s procedures[1]. The IRS does not audit most taxpayers, so why should DCAA?

I do not agree with the comparison for several reasons. I believe such comparisons are like comparing oranges and Italian race cars.

One simple reason is that the IRS is in possession of enormous amounts of collateral data on taxpayers. A huge advantage not enjoyed by DCAA. The IRS receives a copy of your W2 from your employer, your interest income from your bank, even information on your health insurance. The collateral information for businesses is even larger to include payroll tax filings, SEC reports, and more.

In other words, when the IRS gambles on taxpayer cheating, they know a great deal more information then DCAA does when they gamble on contractors with taxpayer’s money.

I realize that the majority of contractors rose up and began dancing behind their desks at the idea that there is about a one-five chance of DCAA showing up to audit your incurred cost proposal.

While I do not wish to throw any contractor in front of the bus filled with DCAA auditors, I believe we are all better off with an active viable DCAA audit function. The friction of the audit process helps both contractors and the government. Contractors gain wisdom about compliance, the ability to make audits smoother and when to draw the line on ridiculous and even unlawful auditor requests, such as copies of employee’s birth certificates. The government gets practice at their job and, hopefully, learn not to make ridiculous and even unlawful requests[2].

A viable active DCAA audit effort also helps keep the government out of mischief. The decline of the audit function and the resulting backlog of incurred cost proposals reaching monstrous numbers, has resulted in some changes in DCAA methods that I will categorize as mischief: 1) DCAA expanding their ‘model’ (in their minds) incurred cost electronically and; 2) DCAA confusing adequacy and audit.

NEXT – “Good Intentions and an Honest Effort to Avoid Work”.

[2] I received my second request from different audit offices for contractor’s home addresses this morning. The previous request was a couple of years ago. 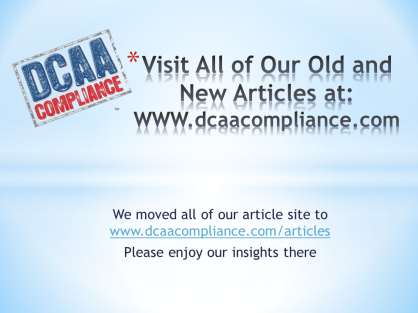 “Additional deliverables in this phase include the following (templates to be provided later by the federal Program Manager):

I recently participated in a Navy SBIR conference where one of the other panelists encouraged contractors not to worry about the budgets on their SBIR Phase One. It appears that may no longer be the case.

I had a dim memory of the DOD program staff asking for similar reports years ago. I went to look and found one form so old that I cringed at the title: “Fund Man Hours Expenditures”. I imagine an updated version of this is in many small business contractor’s futures.

All of this underlines the importance of doing it right from the start. Contractors starting out should start out with a cost accounting system that will meet their needs and the government requirements.

In the current crisis surrounding DCAA, it is possible to receive a cost type contract requiring an approved accounting system without actually having anyone from the government look at your accounting system.

This may sound like a gift from heaven but it is not. All it does is transfer the risk off the government’s back and onto yours.  Under this increasingly common scenario the contractor assumes the following risks:

The government can suddenly withhold all or part of your payments until they now decide your accounting system is adequate.  They may even expect you to continue working while the mess is sorted out.

This withhold is now actually part of the Department of Defense regulations and the subject of a recent DOD OIG audit. This audit criticized DCMA for not withholding 5% of total payments after an accounting system was found inadequate.[1]

They can also hold up any future contracts awaiting the now necessary approval.

Time and time again I am surprised by contractors who believe that accounting for government dollars on their part is unnecessary and a waste of time. A few years ago, I declined to work with a government contractor who bragged about getting DCAA to approve his accounting system without a general ledger system and his refusal to comply with the standards (or as he put it: “ridiculous demands”).

He wished to engage me to prepare and submit the billing on a cost type contract based on what he told me to bill. When I declined the ‘opportunity’, he accused me of being scared. When I told a friend about his comments; she teased me, stating that I was ex 82nd Airborne and not scared of anything. “No,” I replied, “I am scared, not of the government, but him”.

Your accounting system is important because the government says so, even if they come back after three years to punish you.

Each year the government spends billions of dollars with contractors providing vital services for our country. All of this money, to include classified work, is ultimately accountable to taxpayers (we all remember the stories about $400 hammers purchased by the Defense Department). The good contractors reading this book have no desire to make the front page of the papers (or worse the bench in front of a federal judge) because of their lack of accountability.

Almost immediately after publishing the new regulations[4] about contractor business systems, DCMA hit Lockheed Martin with a reduction of 5% in payments for the F-35 fighter. Last time I checked the total withholding was over 47 million dollars. If five percent does not seem like a lot, it represents almost all of the profit Lockheed planned on the F-35. Until they get their business systems approved they are working for free.

It is not only the Defense Department that is tightening down on contractor accountability, look at a recent Department of Energy regulation:

[4] We will discuss the regulations later in the chapter.

Excerpt from Surviving a DCAA Audit, available on Amazon 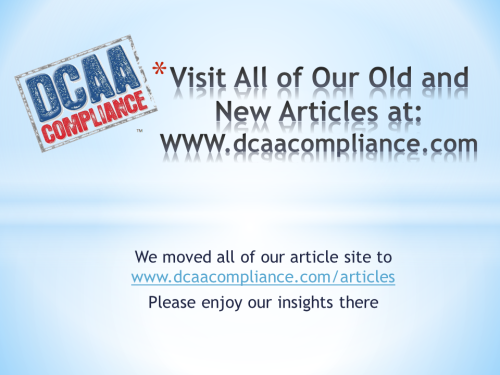 One of the many pleasures in our practice is working with the contractor’s tax accountant or bookkeeper. The contractor benefits by having access to two professionals with a bit of crossover for the same price. Two opinions in harmony, most of the time.

I flew in to support a contractor on an accounting system audit in conjunction with his tax accountant. DCAA showed up and we began one of the strangest audits in the almost thirty years of work in this area. If I told all of the story, DCAA would attempt to send my old unit from the 82nd Airborne after me, but I will tell part of it.

Toward the end of the rather strange audit, the DCAA auditor went on a rampage about small business contractors keeping their books on a cash basis.

This is not an unusual complaint made by some DCAA auditors, but I had never heard contractors referred to as idiots for the practices, especially in front of one of these “idiot” contractors.

I went on my usual contractor defense, explaining to the auditor the history of accrued accounting and the very classical utilization of the GAAP accounting cycle which allowed you to keep the books on a cash basis during the period and make the accruals as part of the closing process.

In this case, as in too many others, my purpose was to remind and educate the auditor not to rush to judgement and to expand their knowledge of the accounting world beyond the limited field of DCAA auditing. I sought to gently argue that the DCAA auditor’s strong comments were not only wrong but displayed a lack of knowledge on how accounting is actually practiced in the trenches.

The client’s tax accountant took a different approach, and I loved it.

He turned to the auditor and told him in no uncertain terms that the contractor kept his books on a cash basis because he, the tax accountant, recommend the contractor do so and that any small business owner that did not do so was an idiot and paying thousands of dollars in unnecessary taxes.

The room fell silent and I managed to keep a straight face as I backed the tax accountant up and said that not only was he correct, it was common sense, and allowed under GAAP as I previously outlined (cash converted to accrual during period close).

The DCAA auditor quickly packed up and left. I held my breath for a couple of days until DCAA approved the contractor’s accounting system, even though I knew that both the tax accountant and I made strong arguments in defense of the contractor’s practices.

Indeed, many of our referrals actually come from the contractor’s outside accountant and I am happy to return the favor when one of my clients is seeking tax or audit work.

I will direct the reader to a previous article about cash v accrual accounting for the specific accounting arguments at https://dcaacompliance.wordpress.com/2016/08/15/all-the-fuss-over-accrued-accounting/. 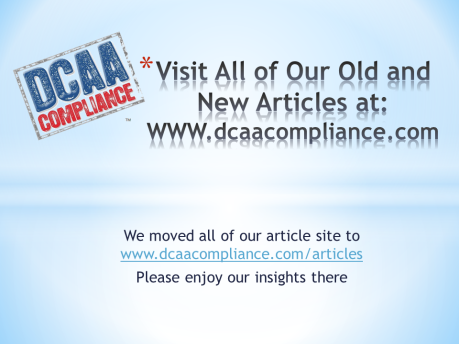 You know who you are. Yes, you, the one trying to figure out just when DCAA is going to enter your life, or worse, a non DCAA auditor or government official is assessing your operations and accounting system. Perhaps, just perhaps, you already had the pleasure and are reading this simply to improve the experience (read: “recover from disaster”).

If You Want the Money

Federal regulations require an approved accounting system before the government can award a cost type contract.[1]

One of the bizarre results of the crisis government contracting entered into in the year 2008, is the increased award of cost type contracts to small contractors without an approved accounting system despite the requirements forbidding this. It started out by contracting officers just ignoring the regulations in order to get the critical contracts issued, but now some of them are actually ‘approving’ the accounting systems after the contractor fills out a form.

I am not telling contractors to turn down contracts, I am just pointing out issues for consideration.

Your solution may be as simple as taking the contract and making sure your accounting system is fully compliant in anticipation of the day DCAA or another auditor working for the government shows up.

Excerpt from Surviving a DCAA Audit available on Amazon